The Lowdown on Lo - Christian Spoken-word Artist and Youth Leader 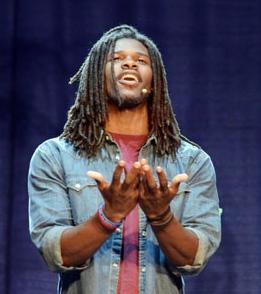 Photo below right: Lo was one of many performers at The Gathering Fallout Tour event for youth recently in Meridian. The next stop is at Camp Lake Stephens, Oct. 18 and at St. Pauls UMC in Ocean Springs Nov. 15. Click here for more details.

People know him simply as "Lo," and more and more people are getting to know Lo these days.
Lo, AKA Loren Alaman, is the Christian spoken-word poet from Mississippi who recently gained national exposure for his performance in Rhetoric 2015, an event of the Passion 4 Christ Movement. The event held in Los Alamitos, Calif., is the largest Christian spoken-word affair in the world. A combined audience of more than 130,000 people who either attended Rhetoric or watched the show online, heard from Lo. 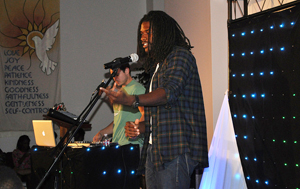 "It was awesome because I never shared the gospel with that many people before," said Lo. "It was such an honor to tell the story of Jesus in that regard. It was an amazing event."

So, what is spoken-word? A definition from the online Urban Dictionary defines it as poetry intended for onstage performance rather than being exclusively designed for the written page. While often associated with hip-hop culture, it also has strong ties to storytelling, as well as jazz and the blues.

Christian spoken-word may be Lo's calling to Mississippi United Methodists. He has moved the hearts of listeners during the 2015 annual conference. He is also the youth minister at The Orchard in Oxford, a United Methodist congregation, where he shares his gift as well. Currently, Lo is a part of The Gathering Fallout Tour, a promotional conference for the main youth event, The Gathering 2016.

According to Lo, it takes him about a week to write a poem. His inspiration for the message comes from his own experiences and the experiences of others like family and youth, which makes it easy for him to memorize a poem. His average presentation time for each one is 3-5 minutes.

"A lot of the things I write, I have prayed before. So, they are words that mean a lot to me," said Lo. "It is not hard to recall them when they matter...To me it feels like somewhere in God's heart the poem already exists."

It is also easy for Lo to recall when he developed a passion for Christian spoken-word.

Lo Meets Girl
In 2010, Lo and his girlfriend, both active church-going Christians, entered Mississippi State University as freshmen. They joined the Wesley Foundation, a United Methodist campus ministry. However, the new level of freedom, in a new environment, challenged Lo.

"I felt like I didn't have to wear this mask anymore," he said. "I just poured myself in to the world, into sin and selfishness. I was not a very nice person to the people I cared about...I kind of gave her an ultimatum and said, 'I just want to be a Sunday Christian and I don't want do all of the extra stuff you are trying to do and I asked if she didn't mind being a Sunday Christian with me. She told me no. So, we broke up."

Lo admits he was bitter -- with his ex-girlfriend and with God. But he managed never to completely turn from his faith or friends who professed their love for the Lord.

One particular friend, who had been writing and preforming Christian spoken-word around the campus, encouraged Lo to write as well. Lo said the idea of him being a poet was funny and certainly far from his childhood dream of being a recording rap artist. Nevertheless, he took his friend's advice and eventually found himself on stage often expressing his pain. Broken, and close to flunking out of school, Lo said he had a conversation with his old girlfriend who reminded him of God's love through prayer and reading.

"It seemed like the way I was missing her turned more like I was missing a Heavenly Father I had not even acknowledged," he said. " I grew my love for Him. What was completely mind-blowing was that He would still want and desire a relationship with me."

Upon renewing his promise to God, Lo did a spoken-word presentation for fellow students at the Wesley Foundation. It was on his last day as a Wesley intern and the first time he spoke solely about God's impact on him. He said dozens of students approached him afterwards to say they had been blessed or going through similar circumstances.

"Once I saw it was something He would use and bless and make fruitful, that is when I decide to pursue it. I don't know how God connects those dots and give me a heart for something, but once he gives me a heart for it, he gives me the words," he said.

Lo eventually rekindled his relationship with the old girlfriend, who now sings in a Christian band. The couple is busy planning their wedding scheduled for Dec. 12.