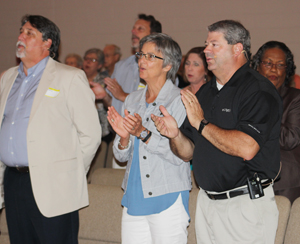 Photo below right: Testimonies of thanks for Hurricane Katrina volunteers combined with lively music moved many people.


Photo below left: Bishop Hope Morgan Ward (dressed in light denim and wearing glasses) stood with some of the Mississippi Conference clergy and laity who attended the St. Paul UMC 10 years after Hurricane Katrina observance. 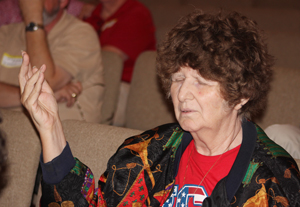 Photo bottom right: The Katrina volunteers who attended the St. Paul UMC service received this Stronger than the Storm cross as a gift.


Beginning with a sprightly recitation of Psalm 27, United Methodist Bishop Hope Morgan Ward spoke to a large group attending an appreciation service to honor post-Hurricane Katrina volunteers. The observance was held at St. Paul United Methodist Church in Ocean Springs, Mississippi, one week before the 10 year anniversary of the storm.

Ward posed a question to the audience from a child to his mother, "How long will we have to remember Katrina?" As the audience pondered, Ward went on to explain "We're all still in a river of grief," and that the "journey toward healing is a long journey."

Ward was serving as Mississippi's episcopal leader of The United Methodist Church when, in her words, "we were caught by surprise," by Katrina's record 28-foot-high storm surge that washed away Mississippi coastal communities. Ward also told the group about events in the immediate hours after the hurricane. One tale was about a planning meeting of disaster response agencies from across Mississippi.

"When we walked into the room there was almost like a sigh of relief from others gathering in that room, and someone said 'Thank God you are here because we cannot do this without the Methodists.'" Her statement inspired many in the group to say "Amen" or support her with a nod as she continued to praise the work of the United Methodist Committee on Relief.

Ward said the church was renewed after Katrina citing there is more "compassion" than ever.  In closing, she called for pastors and volunteers to stand, and she thanked them before praying that all would continue to be healing agents. 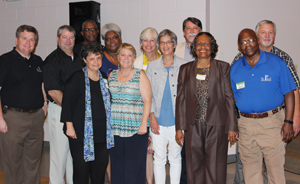 A large sign that read -- Welcome Katrina Volunteers -- was stationed at the entrance of St. Paul United Methodist Church. Dozens of volunteers from as far away as Ohio came to the service commemorating one decade since the hurricane.

St. Paul UMC was hub for thousands of generous free laborers after Katrina. Volunteers like Mike Malkemes of Houston, Texas who said it meant so much to hear those on the program say thank you. Malkemes, who wore a guest name badge outlined in green, described himself as just a guy from Texas who wanted to help with rescue and recovery back then. He said he was in Mississippi about 36 hours after the Katrina's landfall.  Someone directed him and others to St. Paul UMC, and many of them lived there in military-style tents for one year.

"We came in faith and obedience, and God put us all together and created an amazing experience."

United Methodists have helped more than 60,000 people rebuild 25,000 homes on the Gulf Coast since Hurricane Katrina. Sadly 2,000 lives were lost, never to be forgotten.